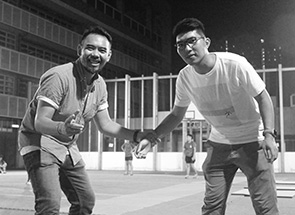 Communication does not necessarily involve words.
Wyman Tang and Yuk-kwong Lo, co-founders of Kabaddi United Hong Kong, believe that sports can break language barriers and connect people from different backgrounds and ethnic groups. This is why they promote the popular South Asian sport of Kabaddi in Hong Kong, hoping to foster interaction among young people from different ethnic groups and enhance social inclusion of ethnic minorities.
Wyman is an adjunct assistant professor at the Department of Anthropology at The Chinese University of Hong Kong. With a particular interest in sports anthropology, he first came across Kabaddi through academic research. It wasn’t long before he decided to devote himself to the study of the sport and visited various countries to see how it is played in different places.
Yuk-kwong teaches General Studies in a secondary school. He always reminds his students to care for society and the people around, and he lives up to his words. Five years ago, he founded Kabaddi United Hong Kong together with Wyman, adopting sports as the medium to promote social inclusion instead of preaching.
Since then, Kabaddi United Hong Kong has actively recruited ethnic minority teens from different districts, training them to be cultural ambassadors and coaches. As career opportunities grow, so will their confidence and social integration. Yuk-kwong, however, mentioned the recruitment is anything but easy due to cultural disparity. For instance, some ethnic minority families hold the view that women should stay at home and should not have body contact with others. Recruiting South Asian girls has always been a big challenge. The language barrier is also hindering ethnic minorities from blending in with the Chinese community.
The two founders are building bridges to connect ethnic minority and local teens. Following years of hard work by the team, they are glad to see Kabaddi becoming a common language for local ethnic minorities and other Hong Kong people to interact, to care for each other, and even to learn each other's culture and dining habits.