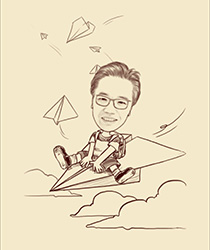 Taking office as the Chief Headmaster of St. Hilary's Primary School in 2018, Mr Chu Tsz-wing is devoted to innovation in education. He has been promoting electronic schoolbags since 2004 while actively participated in activities related to information technology and innovation in education, having hosted more than 300 talks. He received "Microsoft Most Valued Teacher" for three consecutive years (2008, 2011, 2012 and 2013). In 2010, he was given the "Innovative Teachers of Hong Kong" award and "The Best of the Teachers" award in the "e-Learning Best Practice 2010 Competition" organised by Microsoft. For four times, he represented Hong Kong in the "World Innovative Education Competition" held in Brazil, South Africa, Washington D.C. as well as Prague.
Mr Chu was the youngest headmaster of any government-aided primary school when he became the Principal of Baptist Rainbow Primary School in 2013. By promoting experiential learning, he saved the school from the verge of closure while the number of classes expanded from 6 to 22 in five years. In 2016, he co-founded the project "DreamStarter", by which afternoon lessons were turned into student-oriented dream-come-true activities. In just two years, the project is thriving in 11 schools in Hong Kong. He also shares his insights on the teaching blog www.facebook.com/mrchuclassroom/.


Expectation towards Social Innovation and the SIE Fund

"Frankly, the word 'innovative' has become so cliché in Hong Kong when few people think about what are the fundamentals of 'innovation'. 'Innovation' is not a slogan, but an attitude. 'Innovation' is not about projects that use new technologies as a gimmick; rather, it is about extraordinary insights and solutions based on existing thinking models for the good of the society at different times. Regarding education in Hong Kong, what 'innovation' do we need? Simply a slogan? Or the right attitude in nurturing our children? Worth giving it a thought."