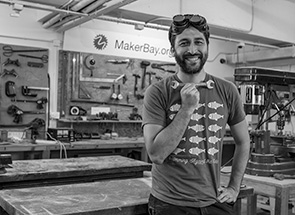 "As a maker, I hope to contribute to improving society and the environment." Of French-Japanese descent, Cesar JUNG-Harada is a designer working in the fields of engineering, invention and social entrepreneurship. He is a nature enthusiast and is dedicated to research and development. He was invited by the Massachusetts Institute of Technology (MIT) in 2010 to work as a Researcher and Project Leader on a robotic clean-up technology to address the BP oil spill in the Gulf of Mexico. After he left MIT, Cesar was inspired to develop "Protei", revolutionary shape-shifting sailing robots for collecting ocean big data which were deployed to measure plastic pollution and ocean radioactivity in Japanese waters near the Fukushima Nuclear Power Plant.
On one hand, the "disposable culture" is prevailing in Hong Kong; on the other hand, Cesar notices many "makers" believe they can bring changes to society with innovative knowledge and technology for solving social problems. In order to promote the "maker" culture and provide more creation space to the city's makers, Cesar established MakerBay in Yau Tong and Central, the former's being a "co-making" space and the latter's for organising workshops and social events in which people can exchange ideas.
Having taught at The Harbour School for two years, Cesar is especially concerned about training for the next generation and hopes every school can deploy a STEAM (science, technology, engineering, art and mathematics) curriculum so that students can learn and practice invention and become proactive citizens. MakerBay offers training of "impact invention" covering both skill set (technology) and mindset (impact focus) for children and adults, aiming to nurture them as new inventors who are keen on building a better world.