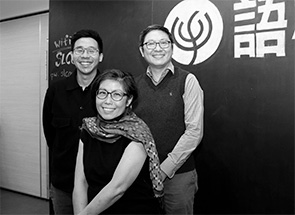 “Deaf persons do not want to be stereotyped as persons with disabilities or hearing impairment. They are persons with abilities to serve others.” Professor Gladys Tang from the Department of Linguistics and Modern Languages, The Chinese University of Hong Kong (CUHK), explained the ideas underpinning her work in social innovation. “Sign language is a language anyone can learn, no matter one can hear or not. In promoting sign language, we aim to facilitate public understanding and recognition of it as a general language for communication.”
Professor Tang believes the essence of social innovation is “to create” – “to create” a new business to address people’s needs when pain points and rooms for development are spotted. She has immersed herself in the studies of sign language since 1993. In 2003, with her active participation, CUHK founded the “Centre for Sign Linguistics and Deaf Studies”, and she assumed office as the Centre’s Director. She and her research team noticed that the public knew little about sign language. People may have mistaken sign language merely as gestures. They may also misunderstand that a hearing aid is all it needs for deaf children to learn spoken language, missing the fact that some syllables are still indistinguishable despite the use of a hearing aid and the children’s learning development would be hindered. Since 2006, the team has started promoting sign bilingualism in education, and founded “SLCO Community Resources” (SLCO) in 2016 to further the mission. Its first project, “Early Sign Bilingual Development Programme”, was an SIE Fund-sponsored project which promoted inclusion and provided training and learning resources about sign language for both deaf and hearing children and their families.
Not only are deaf people service users but also providers. Currently, around 60% of SLCO’s staff members are deaf persons. They aspire to foster a change in the lives of their fellows and are serving people of different age groups. Yet, Chris Yiu, Director of SLCO, pointed out that the social impact of deaf education may be undervalued under the current measurement mechanism, which focuses relatively more on quantity. “Our services change the lives of deaf people. The number of direct beneficiaries may be small. That’s why we would like the social innovation sector to be more open to a longitudinal approach in gauging the social impact attained during the life-long development of the beneficiaries.”
SLCO operates as a self-financed social enterprise. Raymond Wong, Project Officer of SLCO, said, “The toughest part was to switch from a charity mode to ‘an earning mode’.” The staff felt uneasy, as he explained, about the transformation from charitable services to profit-making ones. As SLCO establishes its market value and position, the staff also adapts to the changes gradually. They will evaluate the sustainability of the services from various perspectives such as pricing, profit margins and advertising. “It is challenging to pursue social missions and profits at the same time. Solidarity and a common vision are the keys. The crucial thing is team members share the same goal and work resolutely toward it.”