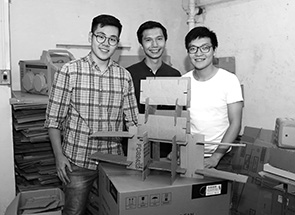 University graduates may never consider collecting carton boxes for their career. No wonder Herbert Wu and his teammates were queried by their parents when The Second Box was first set up.
But these young men have a concern about elderly scavengers. Images of elderly scavengers pushing a full trolley of carton boxes which are worth just a few dimes touch their hearts. Yet they were astonished to learn the high price of carton boxes when they moved out from hostels and acquired them for packing stuff. This triggered a business idea.
The Second Box buys carton boxes from elderly scavengers at a high price. Those boxes are resold to shops such as pharmacies after refurbishment. Income of the elderly is increased, while the environmental objective is achieved.
Nevertheless, The Second Box has a goal beyond increasing the income and enhancing the self-esteem of the elderly. Through interaction with the elderly scavengers, the team aims to understand more about their needs and arouse public awareness and support for them.