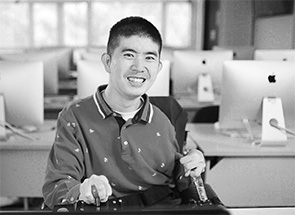 “My body will never recover. Yet which part of a human is the most important? The body? No, it is the soul.” Sunny Cheung, who made this assertion, is a cerebral palsy patient having merely one-fifth the physical ability of an ordinary person and can type with only one finger. Nevertheless, he has been keen on the computer and learned programming by himself. He can’t tolerate his knowledge and dream being drained away. “I have a strong belief deep in my heart: this is not the world’s most miserable man I want to be, but a man who works with proud.” In 2015 he developed an education software “eclass” for Microsoft. In the same year, with remarkable grades, he was admitted by the Hong Kong Baptist University to further his study in computer science and became the college’s first postgraduate student with severe disabilities.
However, Sunny could not type fast enough for examinations. Utilising his knowledge and work experience, “naturally”, as he described, he developed a new voice-controlled input software “CP2Joy” to substitute the functions of the traditional keyboard and mouse. “I wish it can benefit all kinds of disabled persons in future, helping with their learning and enhancing their productivity while bridging the digital gap.”
“CP” is the medical code referring to cerebral palsy, while “Joy” stands for the joystick. By raising the speed and accuracy of the input method, CP2Joy allows persons with disabilities to explore the cyber world with greater convenience.  A user can give commands, for instance, mouse clicks, drags and drops and keystrokes, by pronouncing the five basic vowels “a, e, i, o, u” and adjusting the cursor by a joystick. Developing the software from scratch has been a big challenge for Sunny. With assistance from the Hong Kong Baptist University in promotion and financial support from various funds, the software was eventually launched. This innovator, however, believes that real challenges are yet to come. “The reality is cruel. The road to innovation is tough. One has to be cautious in making every step or else failure would be imminent.”